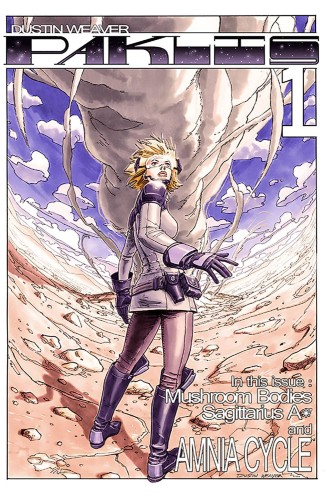 Do you accept the life you've been handed, or do you step into the unknown, even as it leads you into the shadows? In this new anthology series from writer/artist DUSTIN WEAVER, the characters in three mind-bending stories find themselves faced with this question.
In 'MUSHROOM BODIES,' Greg struggles with knowing what's real and fears becoming complacent in a world of human insects.
In the first installment of 'SAGITTARIUS A*,' war hero Linus Rad is on a mission to the center of the galaxy to learn the dark secrets of his dead father's scientific experiments.
In the first chapter of 'AMNIA CYCLE,' Tara, a young Jet-Wing pilot, goes AWOL in the war against the Nuriel in order to help Amnia, a mysterious alien with no memory of where she came from and a desperate need to stop a terrible disaster! When Amnia disappears, it sends Tara on an adventure into the Shadow Zone.
Step into the unknown. Journey into the shadows. There you'll find PAKLIS.