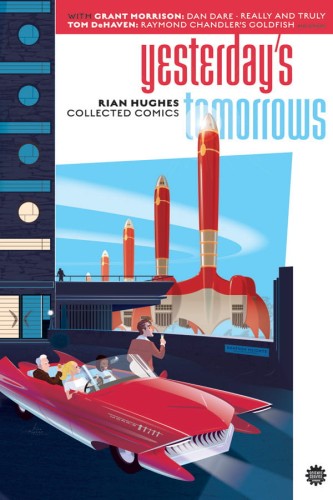 AN ECLECTIC AND STYLISH COLLECTION OF COMICS FROM RIAN HUGHES, RENOWNED ILLUSTRATOR AND GRAPHIC DESIGNER.

In addition to sketchbook pages, merchandise and rare strips—many never seen before or out of print for over a decade—the book features an introduction by comics guru PAUL GRAVETT, who published Hughes’ very first strips in his seminal independent comics magazine Escape.

“Dare is a work of simple and elegant beauty” - Time Out
“One of the most successful and prolific British illustrator-designers of the past twenty years” —Roger Sabin, Eye Magazine
“It’s definitely not the Dan Dare of old. Morrison completely deconstructs the character, using him as an iconic figure of a better past… Dan Dare the brand still says patriotism, individual strength and the dream of a glittering modernist future…”
—Richard Bruton, Forbidden Planet International
“Hughes has been credited with doing more than anyone else to elevate the sophistication level of comic book design.”
—Michael Dooley, AIGA
“Rian Hughes is a luminescent pop culture demon.” —David Quantick (from the foreword)