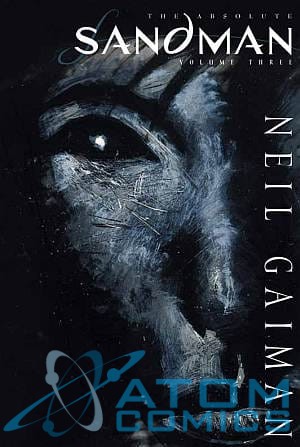 The third volume collecting Neil Gaiman's seminal, award-winning series starring the Dream King in deluxe format. Absolute Sandman Volume 3 presents several key Sandman tales in a slipcased hardcover edition, including "Brief Lives," in which the Sandman's sister Delirium prevails upon her older brother to help her find their missing sibling, Destruction. But their journey through the Waking World has dramatic repercussions for their family and also for the relationship between the Sandman and his wayward son, Orpheus.

Also included is the spectacular short story "Ramadan"; originally published an extra-length 50th issue special, this is a tale of a young Caliph of ancient Baghdad and the deal he strikes with The Sandman to grant his city immortality, with spectacular illustrations by P. Craig Russell (Fairy Tales of Oscar Wilde, The Jungle Book) and the most elegant, flowing lettering by Todd Klein you've ever seen in a comic (one of the best single issue stories of any modern comic in my opinion, utterly, utterly gorgeous).

Never-before-collected bonus features include pin-up pages from galleries in The Sandman #50 and Sandman Special #1, the Desire story from Vertigo: Winter's Edge #3, The Endless Gallery #1, script and thumbnails from The Sandman #50, and a section on the Endless retail products (poster, statues, t-shirts, Little Endless and more). Plus, an introduction by artist Jill Thompson. Unmissable deluxe collection of one of the most influential of modern series.