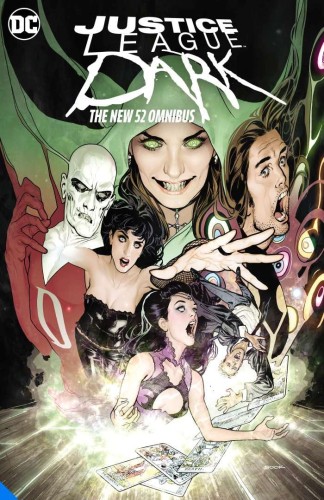 With the Justice League defeated at the hands of the Enchantress, Madame Xanadu must assemble the world’s most powerful and strange magical heroes to prevent her premonitions of end times from coming to fruition! Bringing together the likes of John Constantine, Zatanna, Shade, and Deadman, this unlikely team will be forced to put aside their differences to save the world. Never one to play nice, Constantine and the group will fall apart time and time again, only to come together when the world needs them most. Joined by the likes of a centuries-old vampire, Black Orchid, and Frankenstein, Agent of S.H.A.D.E., among many more, some will live, many will die, but together, maybe they can save this world! Justice League Dark: The New 52 Omnibus features the entire epic run in one massive, accursed tome! Collecting Justice League Dark #0-40, Justice League Dark Annual #1-2, Justice League Dark: Futures End #1, Constantine #5, #9-12, I, Vampire #7-8, Justice League #22-23, Justice League of America #6-7, a story from The New 52! Free Comic Book Day Special Edition #1, Trinity of Sin: Pandora #1-3, #6-9, and Trinity of Sin: The Phantom Stranger #11, #14-17, plus an extensive behind-the-scenes art gallery and a brand-new introduction by the writer who started it all, Peter Milligan!